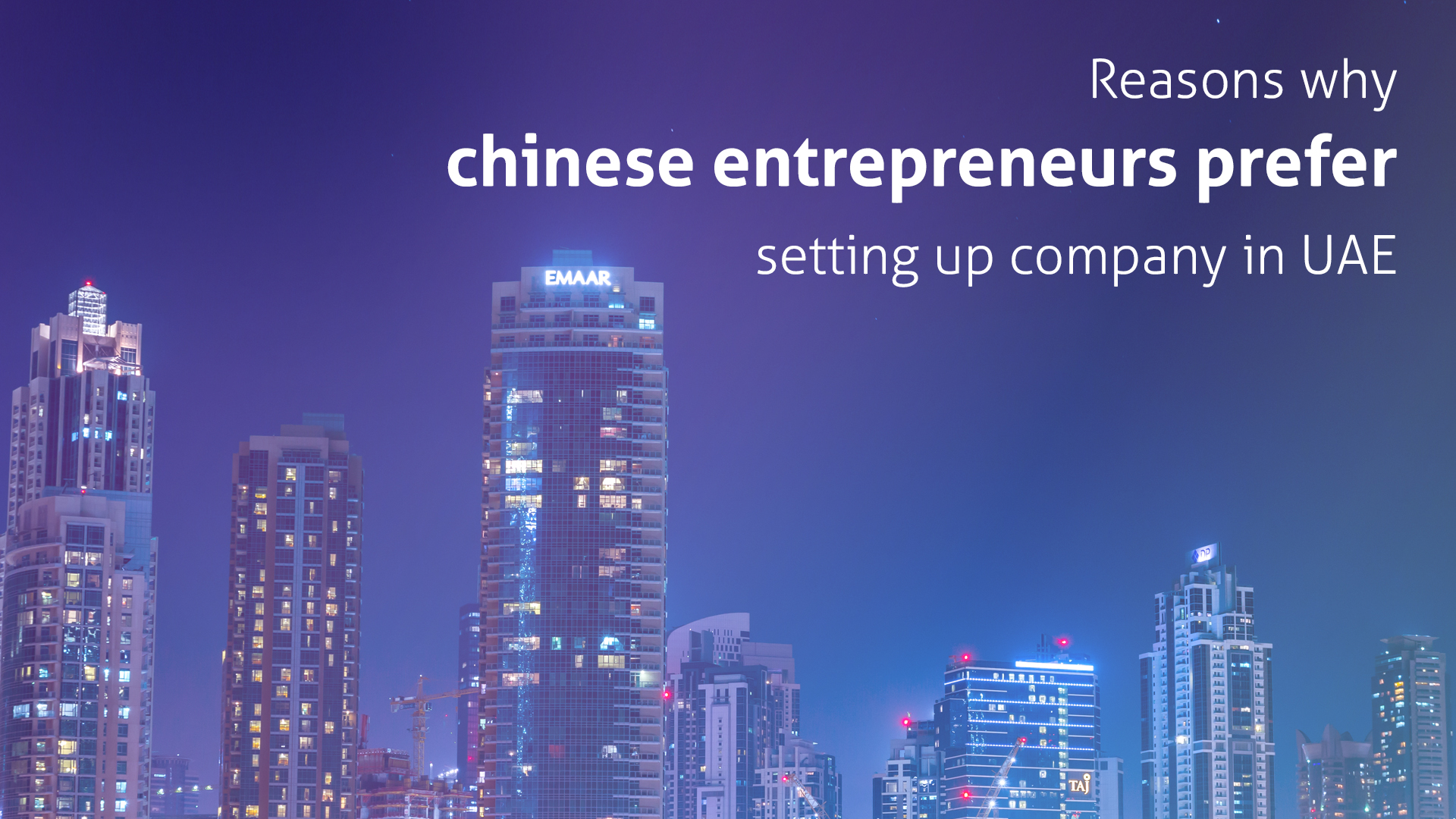 Why do Chinese entrepreneurs prefer setting up a business in the UAE?

Another media report estimates that 10% of UAE’s population are Chinese nationals, which clearly validates that the country is the commercial hub for several Chinese entrepreneurs.

So, why do Chinese prefer setting up a business in Dubai?  And what motivates Chinese investors to start a UAE-based company?

Let’s analyse the immense demand and interest of Chinese entrepreneurs towards the region. Nevertheless, there are numerous reasons because of which Chinese investors prefer setting up a business in the UAE.

China and the UAE signed a memorandum of understanding (MoU) for cooperation on the Silk Road Initiative and the 21st Century Maritime Silk Road Initiative to boost investment and trade in 2018. China has established a strong presence in Al Maktoum airport for the transport of goods to other regions and are in talks on how to develop this initiative in digital sphere. Records state that 22% of Arab-Chinese trade passes through UAE and 30% of China’s exports to the Arab world goes from the UAE. All these attributes make UAE a preferred location and Dubai being the commercial capital of UAE witnesses the most company formations.

Belt and Road Initiative a long-term transcontinental investment initiative aimed at infrastructure development and acceleration of economic integration – connect Asia, Europe and Africa – and UAE is also an important part of it.

UAE & China are jointly promoting the Belt and Road Initiative is in line with the UAE’s interest in creating opportunities for Chinese Investors. UAE plays a pivotal role to extend China’s cooperation with the Gulf and the Middle as well. UAE announced inward investment deals for Dubai of about 3.4 billion U.S. dollars at a Belt and Road forum held in Beijing in April 2019. Formation of several joint ventures and other commercial arrangements between Chinese and UAE infrastructure, transport and logistics companies are in line as a part of BRI.

Chinese companies signed two deals with the UAE during the second Belt and Road conference in Beijing in April 2019. The first is a $2.4bn investment by Chinese wholesale company Yiwu to build a 5.5 million square metres logistics station, the ‘Traders Market’, close to the Expo 2020 Dubai site, to store and ship Chinese goods from Jebel Ali port to the rest of the world. The second agreement aims to create a $1bn food manufacturing and processing plant called ‘Vegetable Basket’ in Dubai, to import, process, pack and export agricultural, marine and animal products to the world.

Trade and diplomatic relationship between China and the UAE

China is UAE’s leading trade partner in terms of non-oil commodities, accounting for 9.7% of its total non-oil trade in 2018, valued at over US$43 billion. China’s trade with Dubai and various other Emirates in the UAE continues to grow significantly each year. It is estimated exceed $70 billion (Dh257.46 billion) by the end of next of 2019.

The UAE is a global trade, transport and finance hub offering China a gateway to key markets. Between 2013 and 2017, UAE exports to China grew by 22% while the UAE’s non-oil exports achieved a 33% growth during the same period, which included goods such as plastic raw materials and products, chemicals, copper, aluminium, iron, mineral ores, ethylene polymers and propylene. Almost 60% of trade between China and the UAE is currently re-exported to Europe and Africa.

An HSBC research forecasts that trade in goods between the two countries will grow at around 9-10% per year until at least 2030. China was the UAE’s leading source of commodities imports in 2018, accounting for 15% of its imports, valued at over $38 billion. UAE-China bilateral trade exceeding $53.3bn in 2017 and plans to grow this to more than $70bn by 2020.

Chinese investment in the UAE real estate increased by 64% between 2016 and 2017, and it is expected to grow 70% in 2019. Given that the expensive real estate prices in China, UAE’s real estate market is more affordable and convenient. Moreover, the perks on taxation, freehold ownership, high rental yields, affordability and tax-free investment makes real estate options appealing.

Reportedly, investors from China accounted for Dh1.7 billion worth of investments in Dubai in the first nine months of 2018, according to figures available from the Dubai Land Department (DLD). DLD has also announced plans to ramp up efforts to attract at least Dh1 billion in inward property investment from China in 2019. To step up Chinese investments in the country, DLD has also opened its two representative offices in China in the past two years including Beijing last June and aims to open a third in the southern industrial city of Shenzhen, and other regions.

UAE Tourism revealed that Chinese visitor numbers increased 11 % in the first six months of 2019. China was the emirate’s fourth-biggest market for tourists, welcoming 501,000 overnight visitors from China. After the two countries introduced reciprocal visa-on-arrival policies in 2017 and 2018 – Chinese national can now get 30-day visit visa on arrival, free of charge and renewable for similar period. More than 1.1 million Chinese tourists visited the UAE in 2018, taking advantage of the mutual visa-exemption arrangement. Moreover, it is anticipated that UAE may have 25 million visitors from China by 2020.

If you are a Chinese national and would like to start a business in Dubai or anywhere in the UAE, simply book a free appointment with our experts.

Shuraa Business Setup help you understand the various benefits of setting up a business in the UAE. We also ascertain and analyse the risks that your business activity might have while doing business in Dubai or elsewhere across the Emirates. Our UAE company formation consultants and experts offer you relevant solutions so that you can start your UAE business in no time!